Because he was born and raised in Wisconsin, he was also heavily influenced by the rolling prairie landscapes found in Minnesota, Wisconsin, and Illinois. His surroundings and philosophy contributed to the creation of the Prairie School Style. The Prairie School style incorporates low horizontal lines that blended into the surrounding flat, prairie landscape.Thinking that rooms in traditional Victorian era homes were closed-in and confining, he designed houses with more open interior spaces. Rooms were often divided by leaded glass panels instead of ordinary walls. Furniture was either built-in or specially designed for their respective spaces. These homes were called prairie style after Wright published a house plan in a 1901 edition of Ladies Home Journal titled, "A Home in a Prairie Town."

Prairie homes come in many shapes: Square, L-shaped, T-shaped, Y-shaped, and even pinwheel-shaped. The have low-pitched roofs and overhanging eaves. Their floor plans are open and there is of a fireplace and chimney at the center of the home. Clerestory windows are a common feature.  There are excellent examples of Prairie School style of architecture in homes throughout the Twin Cities communities. 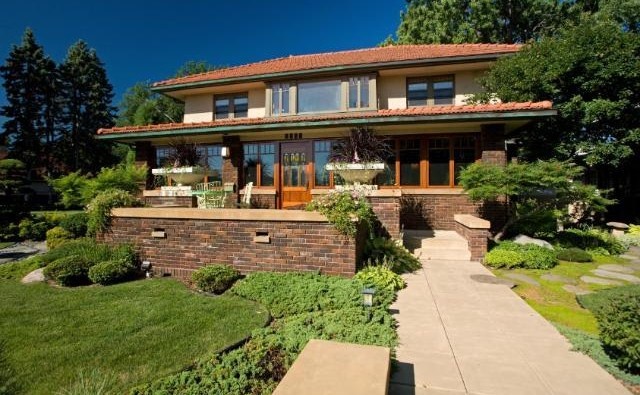