This is the Gold Medal Flour mill in Minneapolis, Minnesota. During 1866, Cadwallader C. Washburn entered the milling business, building a flour mill on the Mississippi River at Saint Anthony Falls. The mill was a 6-story stone structure, with 12 pairs of millstones that had a daily capacity of 840 barrels.

Gold Medal received its name on June 8, 1880, when the Washburn Crosby Company won the gold, silver and bronze medals on the three grades of spring wheat processed flour at the first International Millers' Exhibition. After winning the award, Washburn Crosby began using "Gold Medal" as the brand name on the firm's best grade of flour. On Aug. 19, 1880, the first flour was packaged and shipped from Minneapolis under that name. 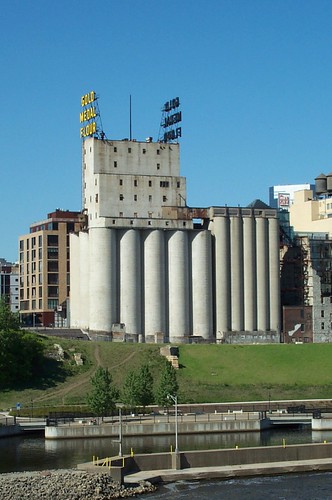 Work at the mill trudged on for years, and Gold Medal Flour made a name for itself as a high quality product. In 1928, under the leadership of James Ford Bell, General Mills, Inc. was formed out of all the mills constructed or purchased by Washburn, Crosby and Company since 1866. Additionally, the Red Star Milling Company of Kansas and Royal Milling Company, Kalispell Flour Mills Company and Rocky Mountain Elevator Company, all of Montana, were combined under the General Mills brand. Gold Medal Flour is still a popular product from the Minnesota company.

As we know, General Mills is now is a highly recognizable company name that makes a wide range of products. Gold Medal flour is one of only a handful of U.S. grocery products to retain its status as the top selling flour after more than a century of existence. And it all started right here in Minneapolis, on the banks of the Mississippi River.

I couldn't find much information on the Gold Medal Flour building shown here, next to the Washburn "A" Mill ruins. I found one source that said these old grain concrete elevators were built in the early 1900s.

UPDATE: I found another source! The Gold Medal Flour elevator was the tallest part of the Washburn-Crosby Complex, one of the larger mills on the West Bank of the Mississippi River. The large sign reading "Gold Medal Flour" flashes in red at night. Redevelopment just after 2000 converted the other parts of the complex into residential units, The Washburn Lofts and the Humboldt Lofts, and the Mill City Museum & Stone Arch Plaza. The elevators are now the only unused portion of the complex.