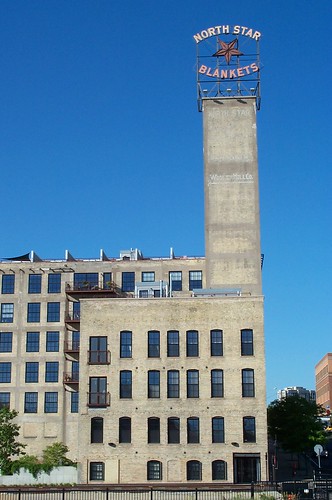 The North Star Woolen Mill is located in Minneapolis on the Mississippi River's west side in the St. Anthony Falls Historic District. Built in 1864 by W.W. Eastman and Paris Gibson, it was originally a textile mill for the North Star Woolen Company. While it was open, it manufactured high quality wool blankets, scarves, flannels, and yarns. It was the nation's largest manufacturer of wool blankets by 1925.

Entrepreneurs in Minneapolis' early days had hopes for developing a textile industry at Saint Anothony falls, similar to that of Lowell, Massachusetts. It was not to be, however, as the industry never had as much success as had been hoped. This was mostly because Minneapolis was a long distance from eastern markets and shipping centers.

The North Star Building sat empty for nearly 50 years until it was re-developed in 1998-99 into lofts. The building maintains its existing exterior including a sign reading "North Star Blankets".
Tags: Minneapolis, West Side