An icon of the Twin Cities, the Saint Anthony Falls are located northeast of downtown Minneapolis between the 3rd / Central Avenue Bridge and the Stone Arch Bridge. Also known as the Falls of St. Anthony, it was the only natural major waterfall on the Upper Mississippi River. I say was because the construction of a tunnel in 1869 caused part of the natural falls to collapse. To prevent this section of river from becoming a useless rapids area, a concrete overflow spillway (also called an "apron") was constructed. Later, in the 1950s and 1960s, a series of locks and dams were built to extend navigation to points upstream. 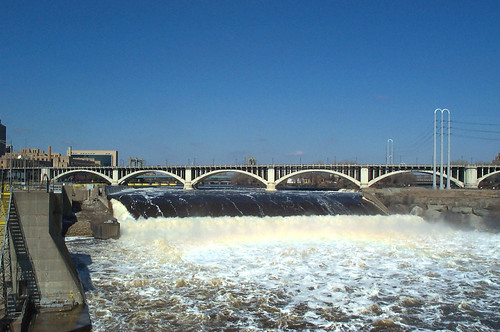 The falls is the birthplace of the former city of St. Anthony and Minneapolis, as the water was a source of power for several industries. The two cities joined in 1872 to combine and fully utilize their economic power for milling operations. As a result, from 1880 to about 1930 Minneapolis was the "Flour Milling Capital of the World" and much of the evidence can still be found here, like the Pillsbury "A" Mill and the Washburn "A" Mill. The area around the falls has been designated as the Saint Anthony Falls Historic District. Read an interesting history of the Saint Anthony Falls and Saint Anthony of Padua.