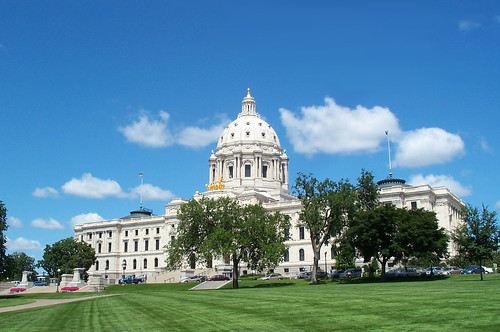 On January 2, 1905, after nearly 12 years of planning and construction, thousands of Minnesotans toured the  halls and chambers of their new state Capitol for the first time. The St. Paul Capitol was immediately hailed throughout the country as one of America's grandest and most beautiful public buildings, a distinction that has endured for 100 years.

The 1905 capitol is the third building to serve as the State of Minnesota's seat of government. The first was built at 10th and Cedar Streets in 1853, when Minnesota was still a territory. It was destroyed by fire in 1881 and replaced two years later on the same site in Saint Paul with a red-brick Victorian structure with a tower. Almost immediately, complaints that the new building was cramped and stuffy began to roll in, and just 10 years later a legislative committee called for a new state Capitol.

An architectural competition in 1895 attracted more than 40 design entries for the rise of land called Wabasha Hill. The winning design was the work of Cass Gilbert, an influential 35-year-old architect who had grown up in Saint Paul. His experience, talent, local connections, and a little persuasion propelled him to the lead of the Minnesota Capitol design competition. 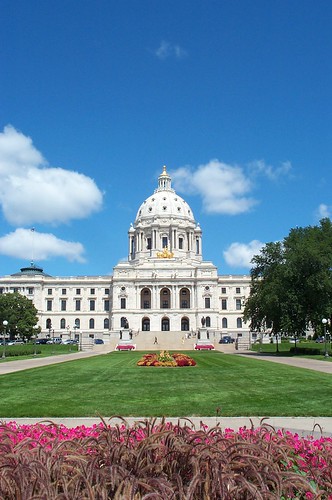 Gilbert was a very hands-on architect, always on the forefront of the construction project. He is the one who insisted on the stunning white Georgia marble used for the upper walls and dome - one of the Capitol's most brilliant features. He called  for Minnesota-quarried granite and sandstone for the lower levels, steps, and terraces, and local Kasota stone for much of the interior. Gilbert's design is dominated by its dome, which echoes that of the U.S. Capitol in Washington, D.C. An inner dome of brick and steel supports the exterior marble of Minnesota's dome, and below that is a painted plaster dome, which is what one sees inside the building looking up from the rotunda.

At the base of the dome is the gleaming gold sculpture officially known as the "Progress of the State", but it is usually referred to as the "Quadriga." Designed by Daniel Chester French and Edward C. Potter, the four-horse chariot and figures are made of sheets of gilded copper hammered around a steel frame. Below the Quadriga are six figures that represent "the Virtues" sculpted in white marble (though the the statues in place now are actually replicas carved in 1975-79 to replace the deteriorating originals.) Twelve stone eagles stand guard around the dome, and the exterior is embelished by classical wreaths, plaques, and a rich variety of carvings.

Although antiquarian in spirit, the Capitol was designed to be thoroughly modern. It boasted all-electric lighting, a state-of-the-art heating plant and even telephones. The final bill, including the site, building materials, interior decorations and furnishings, was $4,458,628.27 - about $90 million in today's dollars. The much unloved second Capitol remained in use as a public building until 1937, when it was demolished.