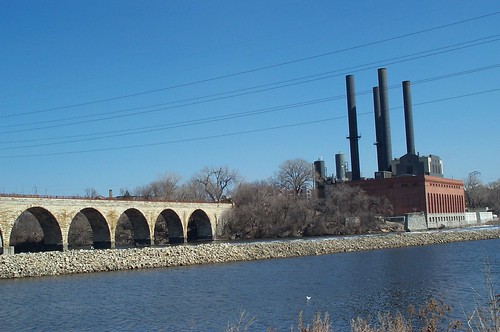 The university closed the Southeast plant to gut and rebuild the interior, and in 2000, reopened it and closed down its old coal-burning power plant. Completed in 2005, exterior rehabilitation won a local historic preservation award. Now it is among the cleanest burning power plants in the country, as the high temperature fires almost completely consume its fuels—natural gas, coal and wood waste. The plant has tested and been approved for oat hull biofuel, a renewable resource that would reduce each student's fees. The Southeast Steam Plant heats 94 of the university's Minneapolis campus buildings — nearly all of them! It also cools 19 of those buildings and provides steam to the University of Minnesota Medical Center, Minnesota State Board of Health and Cedar Riverside People's Center. The plant's steam is transported through an 18 mile network of tunnels to the campus buildings and would be enough to heat 55,000 homes. Additionally, as the steam escapes, the pressure powers the plant and provides 20% of the university's electricity.
Tags: Cedar Riverside, University Of Minnesota, Minneapolis, Northern