The Stone Arch Cinema, previously known as the St. Anthony Main Theatre, is located not-so-coincidentally at the St. Anthony Main shopping and office complex, just down the road from the Stone Arch Bridge (hence the name). It is located on Main Street in the Nicollet Island/East Bank neighborhood of Southeast Minneapolis. Saint Anthony Main fronts the river at Saint Anthony Falls, the only waterfall on the Mississippi River, and sits next to the Hennepin Island Hydroelectric Plant, host of the Water Power Park. 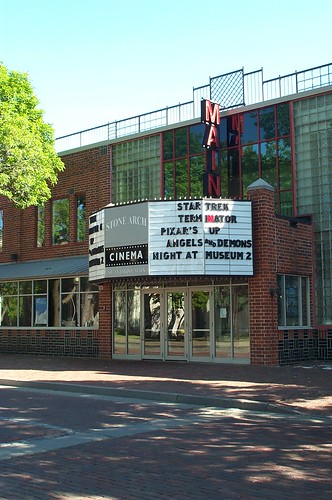 Saint Anthony Main opened as a festival marketplace in the 1980s to revitalize the area. Though initially popular, it had economic troubles after noise restrictions reduced its hours of operation.

The area has since undergone a resurgence, thanks in part to the condominium boom in the early 2000s that spurred projects in and around the area, including the Pillsbury A Mill complex and the Gold Medal Flour complex. Saint Anthony Main is now home to the Stone Arch Cinema, four bars and restaurants, a small cafe, and a Segway tour operator. (Yes, you read that right). 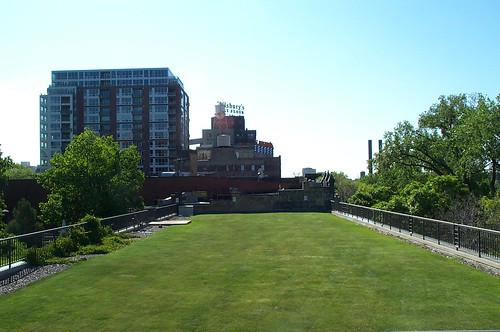 While taking a picture of Pillsbury's Best Flour sign (which I'll have to get a better picture of soon), I noticed that Saint Anthony (or the Stone Arch Cinema itself) has a green roof installed on top that is clearly visible from a nearby sidewalk. Doesn't it look nice?

Fact: The 2008 Minneapolis - Saint Paul International Film Festival held most of its screenings at the 5 screen Stone Arch Cinema.