Posted by Matt Barker on Friday, May 15, 2009 at 11:59 PM By Matt Barker / May 15, 2009 Comment
The Washburn "A" Mill was the second-largest flour mill in Minneapolis, Minnesota. The original mill was built in 1874 by Cadwallader C. Washburn. At the peak of the mill's production, it could grind over 100 boxcars of wheat into almost 2,000,000 pounds of flour per day. Along with the Pillsbury "A" Mill and other flour mills powered by St. Anthony Falls, Washburn "A" Mill the contributed immensely to the development of Minneapolis. 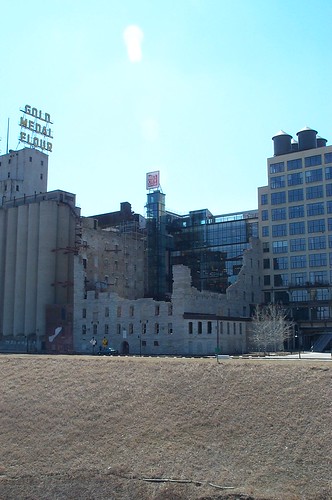 On May 2, 1878, a spark ignited airborne flour dust within the mill, creating an explosion that demolished the mill, two other nearby mills, and an ensuing fire decimated the surrounding business district. The Great Mill Disaster resulted in 18 deaths. The explosion made national news and led by example as to why reforms were needed in the milling industry. As a result, ventilation systems and other precautionary devices were installed in mills throughout the country to prevent the buildup of combustible flour dust. By 1880, the rebuilt “A” mill was the largest flour mill in the world until the Pillsbury "A" Mill was built across the river in 1881. Washburn later teamed up with John Crosby to form the Washburn-Crosby Company, which later became General Mills. For nearly 50 years, the Washburn "A" Mill was the most technologically advanced and the largest mill in the world. It was shut down in 1965 along with 8 other of the company's oldest mills. In 1991, a fire nearly destroyed the Washurn "A" Mill. During the late 1990s the Minneapolis Community Development Agency worked to stabilize the mill ruins. It is now called the Mill City Museum. The museum features exhibits of the history of milling, examples of the machinery that was used to grind wheat into flour, and a tour that shows the jobs that were performed at the mill. 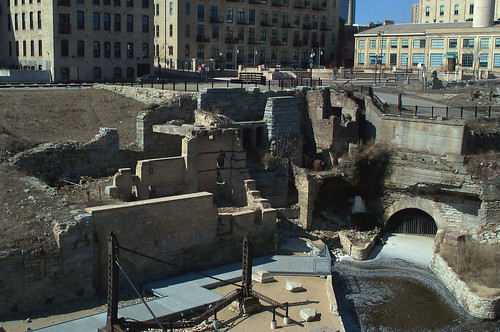 Just in front of the complex is the Mill Ruins Park. The Washburn "A" Mill and Mill Ruins Park are part of the St. Anthony Falls Historic District. They're also within the National Park Service's Mississippi National River and Recreation Area.
Tags: Minneapolis